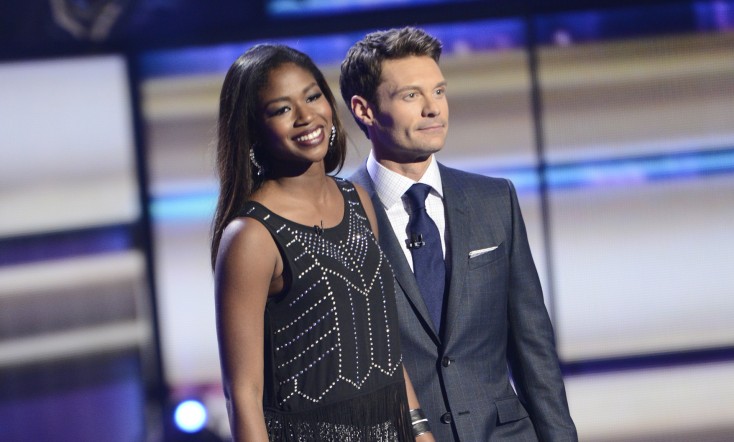 Hollywood – The week before, there was a sigh of relief from the Top 4 contestants of “American Idol” as all four were safe from elimination. This week was a different story as one more would leave the “American Idol” stage leave three standing to head home for their triumphant homecoming before battling it out again next week.

As the lights were dimmed, with Kree Harrison and Amber Holcomb standing before Ryan Seacrest, one would take it harder and cry harder on stage than any other eliminated contestant this season.

According to Jimmy Iovine being good with both performance my not save the humble Kree Harrison. For Amber Holcomb, it has been a struggle as she had been consistently in the bottom two week after week. That consistency would end as Amber Holcomb’s name was called out to go home.

It was a tough moment for Holcomb as she had to sing her swan song before leaving the stage. Not being able to finish the last few words illustrated the impact of Amber’s elimination. She was joined on stage with her father causing the whole audience to tear up as well.

Helping to dry her eyes after the show, Randy Jackson assured her that this is not the end but the beginning for her earlier than the rest of the girls left onstage.

Front Row Features/Pacific Rim Video correspondent Chris Trondsen asked Holcomb, “What was it that set you off in your tearful mood?”

“I feel that leaving everybody and then knowing there is no save, that you’re already gone. That was just hard,” says Amber. “It’s the fact that I’m just leaving and not being able to talk to my girls and have our insiders and stuff. But, I don’t know.”

It’s not an overall goodbye for Amber as she returns back to the American Idol stage during the finale. Trondsen asked, “If you war paired up with a celebrity music artist during the finale, who would that be?”

On a brighter note, Amber can’t wait for the American Idol Tour to start. She’ll be looking forward to more insider moments and killing it on stage without worrying about any eliminations.

“American Idol” returns next week with the Top 3 contestants