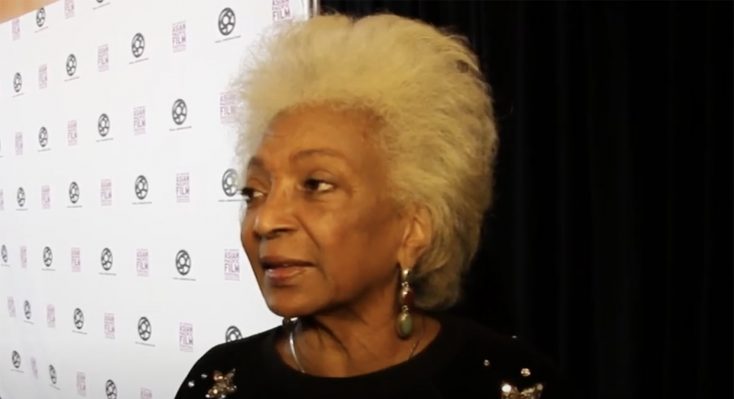 Nichelle Nichols – The Passing of a “Star Trek” Legend

HOLLYWOOD-In the turbulent sixties, Gene Roddenberry created the TV series,  “Star Trek,” envisioning a world where a diverse group of human beings, and one Vulcan, helmed the bridge of the Starship Enterprise, including Nichelle Nichols, who portrayed the pivotal role of Lieutenant Nyota Uhura, the Communications Officer.  She was one of the first black actresses to have a featured role in a network TV series.

Nichols went on to write an autobiography, Beyond Uhura: Star Trek and Other Memories, performed in other shows, including “Heroes,” “The Simpsons” and “The Young and the Restless,” released two music albums and worked with NASA to recruit females and minorities into the space program –  it was a life well lived. Nichelle passed on July 30, 2022, at the age of 89.

In 1994, I spoke with Nichelle about her life and this is part of that interview.

Q: How did your character get her name?

Nichelle Nichols: The name Uhura came from the Swahili word ‘Uhuru,’ which was the title of a bestselling book I was reading when I was interviewed for the role. Gene Roddenberry and I liked the name and softened it by substituting the ‘a’ for the ending ‘u.’

Q: Is it true you almost quit “Star Trek” right at the beginning of its run?

Nichols: I had told Gene that I was quitting the series after the first year and returning to musical theatre, my first love. (She performed in “Carmen Jones” and “Porgy and Bess” before getting “Star Trek”) That weekend I met Dr. (Martin Luther) King at an NAACP fund raiser and he told me what a fan he was. When I told him I was quitting he told me, “You cannot!” He explained the positive impact I was having and convinced me I should remain. I did and the rest is history!

Q: How did you become involved with NASA?

Nichols: Following a speech I gave before a National Space Society meeting, NASA Headquarters asked me to help them recruit the first women and minority astronauts for the Space Shuttle Program. I launched a campaign which attracted thousands of qualified applicants; the response was overwhelming, and I am very proud of my contribution to this national endeavor.

Q: You were there when they unveiled the first space shuttle, the Enterprise. What was that experience like?

Nichols: When the Enterprise was unveiled at Edwards Air Force Base, I was as proud and happy as any little kid at Christmas because I felt so connected to it and its astronauts, both fantasy and fact. It was one of the great moments of my life.

Q: Out of all the TV episodes and movies, which is your favorite?

Nichols: My favorite series episodes were whenever Uhura got off the bridge! My favorite movies were the even numbers, II, IV and VI. That’s why I suggested they should skip VII (Generations) and go directly to VIII!

Q: What did you think of Captain Kirk’s death in “Generations?”

Nichols: I think it a great mistake to kill off Captain Kirk or any of the ‘magnificent seven;’ Kirk, Spock, Bones, Uhura, Scotty, Sulu or Chekov. Our characters have meant too much to so many for so long.

Q: Why do you think the Star Trek phenomenon has lasted so long?

Nichols: “Star Trek: has lasted because it gave hope to millions of people at a time when the world was going to hell in a hand basket. It turns out that the message of hope Gene created still holds strong today and probably will forever.