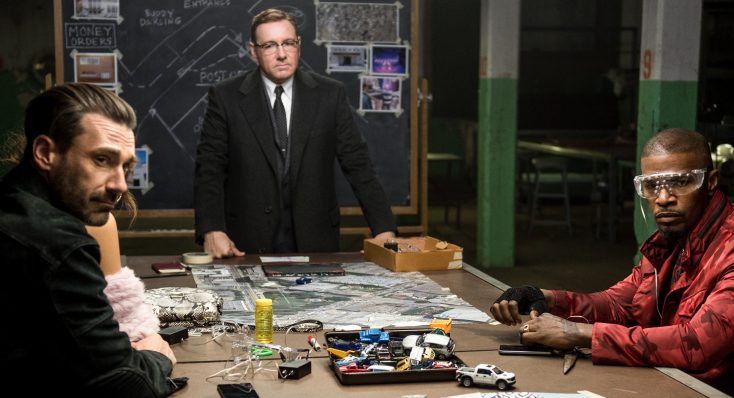 HOLLYWOOD—Jamie Foxx and Jon Hamm aren’t just two actors that are equally adept at drama or comedy, they each have a strong work ethic that guides them through every project they do.

The two co-star in Edgar Wright’s action comedy “Baby Driver,” about a getaway driver whose job is to transport criminals to their destination, all to the accompaniment of pulsating soundtrack pulsing through the driver’s earbuds.

Hamm and Foxx spoke about tackling their villainous characters and being part of Wright’s (“Shaun of the Dead,” “Scott Pilgrim vs. The World”) ensemble.

Q: Jamie, you’re so scary in this. How do you get into that headspace?

Foxx: It’s interesting. I know guys like this. I’ve hung out with guys like this that I know are going to wreck the party. I’m like, “Why are you trippin’?”Let’s just have a good time. We’re at a club. There’s girls. Why you gotta act like that?” I wanted to be that guy to them. I wanted be that guy to Baby. And that’s the way it was written. Edgar (Wright) did a fantastic job of crafting him that way. Then it was a matter of being relentless and not worrying about if people are going to like your character.

I remember doing “Dreamgirls,” where I (also) played a menacing character, where I had to treat Beyoncé not so nice. I remember Oprah (Winfrey) was just shattered. She said (mimicking Winfrey’s speaking style), “I didn’t like you in that. I didn’t like how you were in that, Jamie Foxx.” And I said, “It’s great to be able to play something real. And it’s great to be able to play it in a way that that guy is really that guy. The fun of this movie—because there is music in the beginning of it when you see Ansel, and it’s whimsical—but once it gets down to the nitty gritty, our characters had to be weighty. You see what Jon (Hamm’s character) turns into. He has to turn into that in order to make you feel like there are some real stakes.

Q: What did you love most about the characters you portray in the movie?

Hamm: You get the chance to play a crazy person. You don’t (in real life) get a chance to run around and shoot guns and get chased by cops and drive sideways on an active freeway. Look, if I could do that in real life, I would. But, like Jamie was saying, I’m a man that does believe in consequences. That’s what makes me drive the speed limit and go home at night. That’s what that’s all about. That’s the dream. That’s why you get into this business—you get to run around and play pretend. That’s the best. If you wanted to just punch a clock, there are plenty of other jobs you can do. But to get a chance to run around with a stupid haircut and cool clothes and a (carry) a big ol’ gun and (drive) a nice car.

Foxx: You can’t look bad doing that. I’ll tell you when I started working on this movie, I’d get calls from girls that I ain’t heard from in years. They’re sincere, like, it’s business. I was just wondering, “What’s it going to be like on set.” (snaps his fingers). You have to step right up.

Q: How was it working together?

Foxx: It was great.

Hamm: It was great. Honestly, Jamie and I knew each other from here and there and everywhere. We’re contemporaries. We hang out in the same places sometimes here and there. Honestly, it was a pleasure. Jamie’s work speaks for itself and he’s been doing it for a long time. I’ve been watching him for a long time. From stand up to “In Living Color” to fill in the blank, to winning Academy Awards. So, it’s a pleasure to be on the same set. It’s a pleasure to be in the same scene. Yeah, man, there’s nothing like it. It’s like getting to play in the big leagues. That’s what you want to do.

Foxx: He knows and I know that sometimes it doesn’t work out. You work with somebody and then it doesn’t work out. So, when you see Jon, you’re like, “Oh man, he has the goods.” Anytime you see someone who has the goods, and you know this because you’ve probably interviewed everybody in the world, and you see someone (like Hamm) who’s comfortable with who they are, they’re really talented, there’s no need for anything other than, “Let’s get together and work.” And then you get together and think, “Yo, let’s do this other thing. We need to go do this more of this.” I was a little nervous to ask about my little movie that I was shooting but there’s still time to have time. I have another little movie that I shot …

Hamm: This is going to turn into a pitch real quick.

Foxx: (to Hamm) I am doing some stuff if you want to think about it.

Q: Music is so important to the film, especially in the (Focus song) “Hocus Pocus” shootout scene, were you aware of the music that was going to be used in that scene or were you surprised when you heard what was used in the finished film?

Hamm: It was in the script. It was baked in, literally. Edgar wrote these scenes to those songs. It’s apocryphal at this point but he’s talked about it. We had the earwigs in or, if there was no dialogue, there was playback. So, we’re conscious of all of that. I’d never heard of this before. Because there are so many other things that go into making a movie—you’ve got to cut if for time, you’ve got to cut it for the censors, you’ve got to cut it for this or that or you can’t clear the music. Somebody’s living on Majorca (who says,) “I’ve got the rights and you ain’t getting them.” There’s so many things that you have to go through to make this kind of thing happen that people just don’t do it. The fact that it took Edgar 10 years to make this thing happen was remarkable. So, yeah, we were very aware (of the music). We were choreographed to this (music).  We weren’t going to change this stuff.

Q: Even the bullet shots to the notes of the song, it’s incredible.

Q: There are two different romantic relationships in this. Ansel Elgort and Lily James’ is more innocent one. Yours and Eiza’ Gonzalez’ is more twisted. Which one is true love?

Hamm: What’s the French phrase? Amour fou? It translates to “crazy love.” You can’t help it. It’s not a coincidence that all of the characters’ (names in “Baby Driver”) begin with “B’s” and “D’s”—Buddy and Darling, Baby and Debora, Bats and Doc. That’s on purpose too. Edgar is that detail-oriented with that kind of stuff. And (the title) “Baby Driver.” He makes those themes work.

Hamm: It takes a village. It’s a team approach, you know? Courtney Hoffman, our costume designer, is fantastic. She came up with this with Edgar. It was a collaboration, in a very real sense, of having this palate that was very primary colors. The first time you see Jamie, he’s red. Whatever that does, it hits your brain in a way where you go, “That’s dangerous.” That King of Hearts like sweater. You’re like, “Holy moly!” That’s a red flag. Literally. Buddy (Hamm) is all in blue; that’s a different message. Darling (Gonzalez) is all pink, very pastel things. And Baby (Elgort) and Debora (James) are black and white. So, you have these bright colors, vivid colors on one side of the equation, operating against these neutral tones. That’s an example of how a costume design can really affect the narrative. That’s when you know everybody is getting a chance to do (his or her) job.

Q: Have you ever tried to just wear one color on the street for a week?

Hamm: What I generally wear is some version of blue, grey and black every day. That’s kind of all I got. I have that little imagination or daring, in any sense. No, is the short answer.

Q: Jon, you’ve been reinventing yourself after “Mad Men.” Why have you chosen these movies you’ve done, playing supporting characters? Your “Mad Men” co-star Elisabeth Moss has been in big TV shows and movies. Her film, “The Square,” just premiered in Cannes.

Hamm: Lizzie’s choices are impressive. I haven’t seen (“The Square”). I can’t wait to see it. We’re good friends and we talk about these things a lot. She and I have similar guiding principles in choosing projects, which is do something that scares you. Do something that’s weird. Work with people that are better than you because that’s how you get better. You don’t get better hitting balls off a tee. You’ve got to face big-league pitching if you want to get better. That’s kind of what I’ve always looked at, consciously or unconsciously. Edgar’s been a friend since 2009, eight years, and I’ve been a fan of his work since I saw “Shaun of the Dead,” and so he was on my radar as somebody who inspired me to do better. So, I said, “Let’s work with that guy.”

When (“The Square” director) Ruben Ostlund made “Force Majeure”—I’d met him at an Academy Awards party or a Golden Globes thing—I told him, “Your movie’s amazing.” And Lizzie told me she was working with him and I said, “That guy’s amazing. Yes! Yes! Do that! Whatever it is, say yes.” You put yourself in those positions and good things happen.