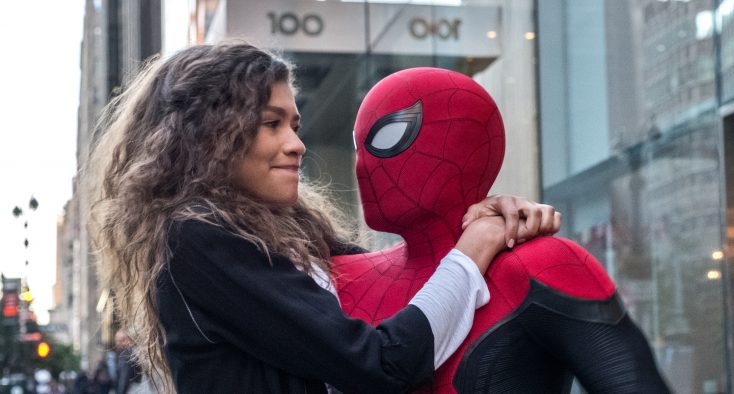 HOLLYWOOD—In “Spider-Man: Far from Home,” Tom Holland and Zendaya reprise their roles as teenagers Peter Parker and MJ, respectively, whose budding relationship is complicated by the fact that Peter is a masked superhero Spider-Man, who possesses superpowers that help him catch bad guys.

The actors, who previously co-starred in “Spider-Man: Homecoming” return for a European vacation school outing that skids out of control when the European cities the high schoolers are visiting appear to be attacked by some otherworldly invader. Parker initially is reluctant to don his suit that his Aunt May has sneaked into his luggage—hey, he’s on vacation and he’s trying to get out of the “friend zone” with MJ—but duty calls.

Holland and Zendaya spoke about reprising their roles and starring in this first post-“Avengers: Endgame” release, which takes into the account the loss of Iron Man and other superheroes from that last film.

Holland: After the events of “Infinity War” and “Endgame,” he’s a very different person. He’s been through a lot, something that none of us can really relate to. Spider-Man, to him, has become a bit of a chore. He decides to hang up the suit, go on holiday and enjoy time with his friends and just be a young adult, someone enjoying their life and learning who they are and where they belong in the world. But, throughout the course of the movie he realizes he’s already found out where he belongs and that’s in the Spider-Man suit with the responsibility of saving his neighborhood and the city and in some cases, saving the world. In this film you will see him learn and grow and step up. This responsibility is bigger than his vacation. For the first time really, he takes on the mantle of an Avenger.

Q: Does this new movie have a different tone than the last ones?

Holland: “Homecoming” was a light-hearted film, a funny film but without sacrificing the emotion or drama that superhero films warrant. I think this film does that in a stronger way because it’s funnier than the first one but the stakes are higher and it’s more emotional so it’s bigger and better in every way.

Q: How was working with Sam Jackson who plays Nick Fury?

Holland: I really, really enjoyed working with Sam. It was a lot of fun. In the film Peter Parker is very intimidated by Nick. Tom Holland might have been a little intimidated by Sam Jackson but he’s a lovely guy and very welcoming and we bonded over golf. We both play golf. It was cool for me to bring Spider-Man into a bigger part of the MCU. Every time I get to do a scene with one of these veterans who have been there since the beginning, it’s just really exciting because we’re solidifying this fact that the character exists in a bigger world and there are endless possibilities.

Q: Zendaya, what can you tell us about the Peter/MJ relationship in the film?

Zendaya: He obviously likes her and what I think is cool is everybody’s expecting ‘oh, MJ goes through this make-over and now she’s this popular girl so now Peter likes her and that’s not what happens here. Peter likes her for exactly who she is and all the little quirks and the weird little things that make her MJ. He likes that so I think it’s cooler that way. I think it proves that if you are meant to be with someone, you’re meant to be with them.

Q: Is the MJ character expanded in this film?

Zendaya: In the first movie I didn’t really have too much to work with but we created a very distinct character with those few little moments. Now we’re able to expand on that and learn more about her. We don’t really know about her. She’s kind of mysterious and in the background so we get to see more sides of her character and how she responds in situations that make her a little more vulnerable and how her and Peter connect. She has this defense mechanism to be sarcastic. Sometimes it comes off mean but she is just blatantly honest. It’s kind of refreshing to have people like that but I also think you don’t always know why people put those walls up and I think it’s wonderful that, as this movie continues, through her awkward romance with Peter, she has to strip away her wall a little bit. She gets “gooey,” and you get to see this fragile young woman.

Q: What can you about Tom Holland and Jacob Batalon’s fun relationship as Peter and his best buddy, Ned.

Zendaya: Tom and Jacob are just so locked into their characters. In many ways I think they are their characters. It’s funny because neither of them has to look at their lines. They are just so funny going back and forth off of each other. They can look at their lines ones and go back and forth, have fun and make up lines because it works for the characters. Me, on the other hand, I can’t. I would freak out and have a panic attack if I don’t know my lines word perfect. Also, MJ is so sure on everything she says that I can’t. She never makes a mistake on anything really. She knows what she is going to say before she says it.

Q: How was shooting in London and on other cool locations?

Zendaya: A lot of the scenes where we’re running from things or crazy stuff is going down, there’s a lot of cool location shots we were able to do. It’s pretty cool to be running and (the background) is the Tower of London or Tower Bridge. I’m really there. Being able to be in the real spaces in real time is fun.

Q: What will audiences love seeing in the movie?

Zendaya: There are so many massive action scenes. That’s what we come to watch in a Spider-Man movie. Those are great and also not to see them in New York. We are used to seeing the action happen kind of in the same locations we’ve seen before. Now we are in Europe with Spider-Man doing his thing in another country. It’s just cool. We got to have a good time in all these beautiful places and around (famous) landmarks is pretty wild.

Holland: Yeah, there’s twice as many action sequences and never a dull moment.