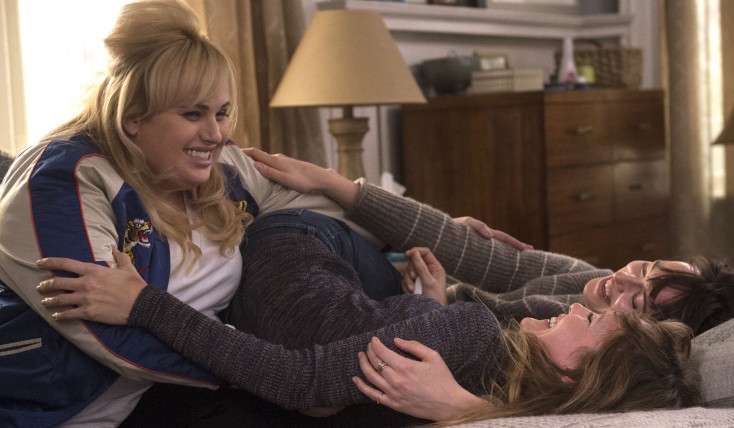 HOLLYWOOD—Rebel Wilson came to fame in Australia in the TV comedy series “Bogan Pride.” For non-Aussies, “bogan” is a derogatory term for someone who is uneducated and unfashionable. Of course, the plus-size Wilson, who created and starred in the series, managed in her unique way to make her main character—and all bogans, for that matter—hip.

It didn’t take long for the talented actress, whose career came to her in a vision while recovering from malaria, to be noticed by Hollywood. In just a few years, the 35-year-old has become the go-to actress for comedy, with supporting—and scene-stealing—roles in “Bridesmaids,” “What to Expect When You’re Expecting,” “Bachelorette” and, of course, the “Pitch Perfect” comedies.

Unlike the many boisterous, foul-mouthed characters she has played, Wilson is quiet and much more reserved in person, though her appearance is still eye-catching. For an interview, she is dressed in a light blue denim shirt, with the sleeves rolled up, a white skirt and sexy pumps. She is enjoying a solid and steady career as a comedic actress that has afforded her a fancy lifestyle. Living in L.A. is a far cry from her humble beginnings on the outskirts of Sydney, where her parents raised show dogs and came up with unusual names for their kids. Yes, Rebel is her real name.

Wilson does what she does best in the new sex comedy “How to be Single.” She plays Robin, a happily unattached paralegal who shows Dakota Johnson’s naïve Alice the ropes of living a happily single life in Manhattan. She parties hard, has a voracious sexual appetite and doesn’t carry any of the baggage that marriage-minded women sometimes bring to a relationship. For Alice, navigating the uncertain waters of New York City’s single life is challenging, especially coming off of a long-term relationship with a guy she dated throughout college.

Upon meeting Alice, Robin is determined to show the new girl the proper way to enjoy single life, which is her way. Tricks like how to get free drinks at a bar, where to hook up with someone at work and when to text the guy she slept with the night before are all in her book. The R-rated comedy also stars Leslie Mann, who plays Alice’s older sister Meg, a single gynecologist longing to have a baby and Alison Brie as Lucy, who thinks she can calculate finding the perfect match on her laptop.

The charismatic actress who described her onscreen character Robin as “eternally single, like me,” spoke about playing the ultimate happy single girl, doing physical comedy and the joys of working in a mostly female ensemble cast.

Q: It’s always struck me in modern sex comedies like this that no one ever gets an STD. Your character mentions a disease during the sauna scene with Dakota Johnson’s character but that’s about it.

Wilson: It’s called LTIP, but that was just a made up thing for the movie. So, do you think we would be riddled with STDs, our characters? I’m sure my character probably has had one or two, seeing as she has so many one-night stands and gets around a bit. So, I think, yeah. Definitely.

Wilson: He’s German, which was really interesting. He’s never done a comedy before. His style is not someone like Leslie’s husband (filmmaker) Judd Apatow, which is very improvised. So we would start improvising and he’d be like, “I like it when you just stick to the script.” And then we’re like, “But in America we make things up and that’s normally the better jokes.”

I was lucky that some of the scenes were cross shots, which means you can improvise. That sauna scene was one of the rare few that was cross shot. But we still added in improvised beats. Christian is a very technical director, so a lot of the shots were carefully set up. But definitely whenever I could I would throw in jokes.

Q: What was one of the improvised moments you were most proud of?

Wilson: There a bit where we’re pulling up the hospital in a taxi, and I say, “The door won’t open.” That whole scene was completely improvised. We’d done two earlier takes where we just opened the door and ran into the hospital, and I said to Leslie (Mann) and Dakota (Johnson), “Let’s do something that they’re not going to expect,” and so we did this whole thing where we tumble out of the taxi. Luckily, because we were all mic’d, they got it. That was my first day of filming—that scene. I really jarred something when I fell forward out of the taxi.

Q: Did you really pull Leslie out the car’s window?

Wilson: Yes, but she’s not very heavy. There’s a little bit where Dakota opens the door and says, “Guys, it was open.” That was really good.

Q: Is physical comedy something that is innate in you or did you learn it when you went to comedy school?

Wilson: I don’t know. I think it’s just about going for it in take and not really worrying about your personal health and safety, like when you just run into the middle of the street and jump on a moving taxi. I do like going for it like in “Pitch Perfect 2” I did my own aerial stunts, which are really dangerous. It was really hard, but it’s always good with comedy—you want to hit it at a lot of different angles. You don’t just want to have jokes. You definitely want to do some physical set pieces and stuff.

Q: Of all the characters in the film, do relate to one in particular?

Wilson: The thing I like about my character is that she’s kind of eternally single which is like me in real life, unfortunately. I haven’t met the right person yet. So I really related to that. Also, the overall message of the film is, “Don’t be stuck in a co-dependent situation. It’s all right to be single and look after yourself,” which I think is a really good message.

Q: Do you feel sometimes, especially as a female comedian, that you’re put into a box?

Wilson: I believe I came to Hollywood at exactly the right time, because my first job was “Bridesmaids.” I auditioned for Melissa McCarthy’s role, but I didn’t get it. They liked me, though, so they added me into the film. When that movie became a massive hit the following year, it spawned all these amazing female comedies like “Pitch Perfect.” There are these female ensembles where the women can be outrageous and bawdy. Look at Amy Schumer last year in “Trainwreck.” That’s really a lot of sexual humor and stuff like that. I think now it’s becoming the norm. Also the movies are R-rated, whereas before female comedies were more tame than the guys’ comedy. But now I’m noticing they are really encouraging us to do R-rated, super-honest, edgy kind of material.

Q: You’ve been part of a lot of female driven ensembles. How important is it when you’re working with these women to support one another both on screen and behind the scenes as well?

Wilson: When I was coming up in the industry, you were always treated different in those situations and your roles aren’t really that good. You always try to make it better, but then you’re not really the focus of the film. Whereas a movie like “How to Be Single” or “Pitch Perfect,” they have female writers and the female roles are normally written better.

I’ve worked with a lot of great guys as well, but there’s something about the female ensemble movies that are more fun in a way because sometimes when you’re in the male (centric) movies, you’re just playing the wife or the girlfriend, and it’s not as exciting.

Wilson: (deadpan) Yeah, she’s not as good is she?

Q: Hollywood is so concerned about weight. Do you think there’s an advantage to being a plus-size actress?

Wilson: There’s a whole science to it where if a woman is very, very attractive it’s harder to laugh at her. It’s also much easier to laugh at a guy than at a woman. I took this class at university called “Comedy and Power” that was very interesting. I remember being a young actress and I wasn’t as big as I am now. I was in a play with a girl who was getting more laughs and I was wondering, “What is it? What is it about her?”

Sometimes, of course, you use whatever you’ve got. My physicality is this right now, so I definitely use it. But I think I could lose weight and now I have such a big fan base, I’d just be doing different things. It’d be just as interesting and funny I think. A lot of larger female actresses get pushed into the comedy roles. I don’t quite know why.

Wilson: I try. When I first started acting I tried to do serious, but then people would just start laughing. My family reckons I’m not funny at all. They think they’re all funnier and I’m like, “What professional comedies have you done?”

But, no, I didn’t think I was funny at all when I was growing up. I was a very studious girl, very sensible and responsible, but I think if I really got to know people then my comedy would start to come out. Even when I first started acting, I didn’t think I would go into comedy. The first play I did in Australia I really thought I was playing a serious role but everybody just started laughing, so almost instantly I just clicked in and went, “There’s something about me that people like to laugh at.”