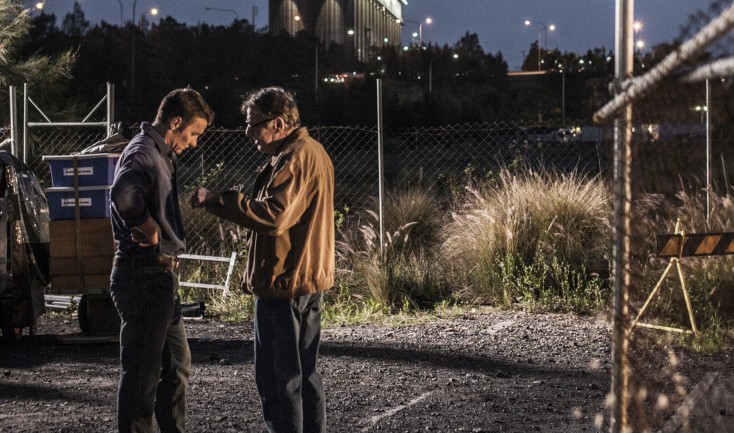 He would shoot his scenes as the leader of a Navy SEALs team sent on a mission to kill 9/11 mastermind Osama bin Laden at night and then, during the day, he’d work on his script.

Originally, “Felony” was supposed to be a short film about a police officer that must decide in a split second what to do after he runs over a child on a bicycle, according to Edgerton, a native of Blacktown, near Sydney. But as he wrote the character study, two other minor characters in the piece—a pair of detectives—began to intrigue him, so he began fleshing them out in the script, and the story became much broader and more provocative in scope.

Edgerton, 40, explains that “Felony” is one of many writing projects he has quietly worked on in his spare time, but it also was the one—with its questions about ethics and empathy—that he envisioned as a film. After reading his script, others in the Australian film community got on board. Producers Rosemary Blight of Goalpost Pictures and Michael Benaroya of Benaroya Pictures joined forces with Edgerton’s own Blue-Tongue Films. Australian director Matthew Saville (“Cloudstreet,” “Noise”) was brought in to helm the psychological thriller.

Bearded and dressed casually for an interview, Edgerton spoke about his first screenplay credit in a film in which he also stars as Malcolm, an upstanding family man and honorable peace officer, who on his way home from celebrating the takedown of a notorious drug trafficker one night, strikes a young bicyclist. In a split-second, he has to make a life-changing choice: fess up or cover up. Two-time Academy Award nominee Tom Wilkerson plays Carl Summer, a revered police detective who arrives on the scene with his idealistic young partner, Jim, played by Jai Courtney (“Jack Reacher,” “Divergent”). What happens over the next few minutes is revealed in small pieces throughout the film.

Summer can spin it so that it looks like a hit-and-run and Malcolm was the hero who stopped and rendered aid to the critically injured child, but as Courtney’s Jim investigates the incident independently, he uncovers a different story.

“I wanted to understand what punishment, guilt and forgiveness were and where those things come from,” says Edgerton, who next will be seen in Ridley Scott’s epic Bible saga, “Exodus: Gods and Kings,” in which he plays the Egyptian pharaoh Ramesses II, opposite Christian Bale, who plays Moses.

Q: Can you talk about working with Tom Wilkinson, who leads your character down a dangerous path?

Edgerton: The challenge when you work with someone that you’ve admired or respected their work for so long is to try and put that aside. With all of the great actors I’ve worked, when you look behind the curtain, there’s a lot of hard work going with them, as well as their natural ability. They just make it seem so effortless. Working with a great actor like Tom, it’s sort of like the opportunity to play tennis against a great tennis player. You want to play against someone really great because they’re going to lift your game. You definitely feel like, “I better restring my racket today. I’m about to hit the court with Tom Wilkinson.” (He laughs.)

Q: Tom’s character has an interesting line about how prison is for people who can’t sort of govern themselves. What’s your perspective on that?

Edgerton: It’s one of many kind of moral and ethical questions that I want people to think about in the movie. It’s like, what punishment fits what crime? Also, what punishment suits what kind of criminal and what punishment suits what kind of individual? If the individual is possessed of a deep conscience mixed with the fact that the crime they committed was a mistake, should then he have a different social justice outcome compared to someone who’s an intentional criminal? It’s an interesting question because you go, “If I did that thing, I still think I should deserve to go to prison. However, my best prison would probably be my own conscience.” Maybe jail is a weird place for someone like that to be. In the movie, that idea may be more convincing because Tom’s the guy telling you. He hits that with such conviction from a character that sees the world not in black and white terms anymore as Jai’s character does, but in a series of grey patches, which is, “Maybe there’s a different outcome for you, Malcolm, because you’re a good person and you made a mistake.”

Q: Since Australia was established as a British penal colony, have you ever researched your roots to see how and why your ancestors arrived in Australia?

Edgerton: No, but I’d definitely like to know. My father’s side is British. In relation to the film, what’s interesting is Australians have a very interesting relationship with authority and authority figures. We celebrate criminals quite often, like Ned Kelly and the bushrangers. We like crime stories and, quite often, we don’t like the police. I definitely was mindful of that when approaching telling a story set within the police force. It’s interesting because some audience members have a particularly strong attitude to a character in the film that Jai plays. He is trying to do the right thing but they kind of want him to stop, which is really interesting. It’s like they kind of empathize with the guy that’s done the wrong thing, which is weird.

Q: What’s it like having broken through in the U.S. and global film market while still wanting to make some films for the home country?

Edgerton: I like going home to Australia to make movies for certain selfish reasons too. I just like being at home, and the opportunity to go home around the summertime and make this movie was really kind of cool. There’s also a giving back aspect, like I want to be part of my local film industry. I feel sad when a year goes by and I feel like I’ve completely lost touch with what’s going on in the movie business back home. It’s a smaller pond but it throws up some pretty good fish every now and then: some good movies, some good talent. It’s a good place to go back and make films.

Q: Having just finished working with director Ridley Scott on “Exodus: Gods & Kings,” did you learn anything from him, especially if you have your eye on directing in the future?

Edgerton: Yes, he’s very specific. Even though Ridley uses a number of cameras, there’s a specificity to the way he’s orchestrating a scene. You kind of get a sense that he’s like an old school director where he’s cutting the movie in his head before he shoots a scene. So there’s a clear direction he’s headed for, a clear path and a clear collection of the pieces he’s looking for. In fact, Matthew (Saville) who directed “Felony” is also very specific. I learn something from every director I work with and the more that I’ve kind of gotten close to wanting to direct things, I’ve become more mindful of being aware of what different directors are doing. We have the luxury as actors to watch many, many different directors work. I’ve seen like 30 guys and girls have a crack at it. I could cherry pick the best and the worst and just hope for the best when I’m that person.

Q: How was it playing a pharaoh in that film? It’s quite a Ridley Scott production, isn’t it?

Edgerton: It was bizarre. It’s like the biggest movie I’ve ever been involved in and maybe the biggest one I will ever be involved in, and I’ve been involved with big movies. In many ways, it was such a dream come true because I just love him, and Christian is one of my favorite actors. So it was kind of a great and surreal gift. I had a really great time. On a personal level, I was going through some unusual kind of things in my life at the time and it kind of helped bring me back to life in a strange way. Sometimes movies have done that for me. I’ve been on kind of automatic pilot in my life and then I’ve handed my life over to a movie because it feels to me like kind of going to hospital. (He laughs.) They look after me, and there is this person who’ll feed you and pick you up in the morning. I kind of just fell into Ridley’s movie with this secret hope—I wasn’t throwing it on him—that by going away to this adventure in another land far ago in a far away country, that something might come back to life in me. And it happened very quickly. I just loved it so much.

EXCLUSIVE: Filmmaker Will Wernick Takes Viewers on Another Escape Room Journey with an International Twist