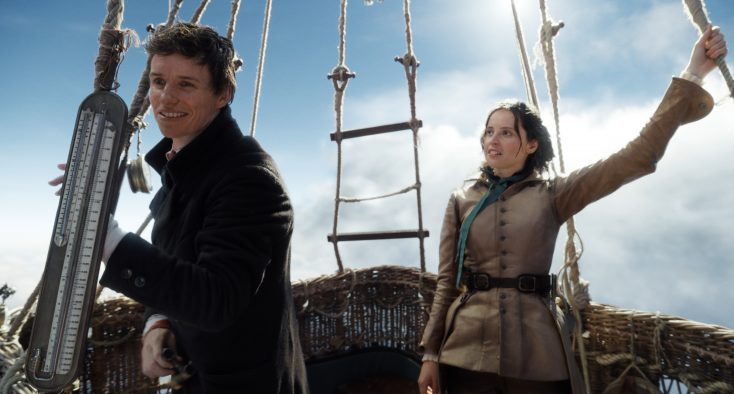 HOLLYWOOD—To create the costumes worn by actress Felicity Jones, who plays a balloonist in the high-flying period adventure film “The Aeronauts,” Oscar winning costume designer Alexandra Byrne scoured the diaries of female mountaineers and explorers of the mid-19th century for inspiration along with drawings and photographs.

“It was incredibly interesting because there were amazing women explorers and mountaineers at the time; you see that in photographs,” explains Byrne, by phone. “I read a lot of their diaries because that really tells you the truth.”

Byrne has designed thousands of costumes throughout her long career for stage and screen. Notably, she created the 16th century costumes for 1998’s “Elizabeth,” 2004’s “Phantom of the Opera” and more recently “Mary, Queen of Scots,” released in 2018. Since 2011, she’s assembled costumes for several Marvel Cinematic Universe films including “Thor,” “The Avengers” and “Avengers: Age of Ultron.”

Raised in Stratford-Upon-Avon, Byrne seemed destined for a career in theater and film. The imaginative designer has been nominated for a Tony, a British Academy Television Award and has earned five Oscar nominations for her costumes, taking home the trophy in 2007 for “Elizabeth: The Golden Age,” in which she transformed Cate Blanchett into the Virgin Queen Elizabeth I.

“The Aeronauts” combines the true story of Victorian era meteorologist James Glaisher, who rose to great heights (literally) in 1862 by flying in a gas balloon with fellow ballooning enthusiast Henry Tracey Coxwell, breaking the altitude record by soaring to 37,000 feet above the English countryside, taking measurements of the temperature and humidity of the atmosphere throughout the flight in hopes of proving this theory that weather could be predicted. As the balloon ascends to the frigid upper atmosphere, Jones’ Amelia, whose experience in piloting balloons and is dressed more suitably for the scientific mission, has to make a heroic climb to the top of the balloon to get herself and her flying partner safely returned to the the ground. Filmmaker Tom Harper (“Wild Rose,” BBC’s “War & Peace”) and his “War Book” screenwriter Jack Thorne flipped the gender of Glaisher’s partner, inspired by Sophie Blanchard, a pioneering 18th century French aerial balloonist.

Byrne spoke about her inspiration for creating not only the costumes for Jones’ Amelia, which include not only her “oilskins” flight suit to protect herself from the freezing temperatures while aloft, but also her circus-like costume, which she wears at the launch of the feat with Redmayne’s scientist character, and other costumes for the period drama. She also discussed working with filmmaker Harper and the collaborative effort with other department heads including hair and makeup designer Jenny Shircore, with whom she had collaborated previously on films including “Elizabeth” and “Mary, Queen of Scots.” The two collaborated on every detail together.

Shircore calls Byrne as “a great friend and guide.”

“You can work on films where you hardly have anything to do with the other designers involved,” she says. “But this production, we all felt like we were in the basket together.”

Q: It’s a period movie but it’s also an action movie. Was that factor important in designing the costumes?

Alexandra Byrne: Yes, it is, because the actors have to do many things and we have to be able to accommodate them. So, all my Marvel training came in handy. Everything you do adds up to a working knowledge that you have.

The main challenge for me was color because I knew in the photography and skyscapes, we were going to have some outstanding clarity and light. I wanted to match that with the voracity of the clothes as well as storytelling realm. So, I paid particular attention to the use of color.

Glaisher goes up in a balloon and he’s dressed in regular clothes in which he gets cold and wet. Amelia does have experience so she has the right clothes with her because she’s a balloon pilot. So, she’s brought her “oilskins.” The challenge for me was to create an incredible look for this woman who’s a hot-air balloonist. Women, in the 1860s, who wanted to do something outside the boundaries of the conventions of marriage and bringing up children, there was this huge balance between propriety and adventure, and between modesty and fame, and how they navigated that to do what they wanted to do. It was a struggle between feminine modesty and a desire to construct an authoritative voice. A lot of women chose to embrace the trivial in order to suppress charges of immodesty. That’s what Amelia does through being a circus performer because for Glaisher to have a woman pilot would have made him the laughingstock, so she makes herself trivial by making herself look like a circus performer. She doesn’t undermine him in any way. Then, (when they’re aloft) she changes into her “oilskins.”

For a woman of that period to wear trousers was outrageous. When I read the female mountaineer diaries, they wrote about being on the side of a mountain and initially being in their crinoline cages and a skirt, and you wonder how on earth they (did their climb in those cumbersome clothes) because they wouldn’t actually be able to see their feet. When you read the diaries, you realize that after they left the base camp in their crinolines and petticoats and pretty skirts, and when they were a distance away from base camp, they took off those clothes and hid them behind a rock before making the climb, and afterward put them back on and returned to the world of people seeing them fully dressed again.

Through the journey of the film, we see three generations of her flight suit. She’s constantly evolving and modifying it. So, I took a lot of it from riding habits of the period. Women used to go to gentleman’s tailors for their riding habits. So, they buttoned the way gentlemen’s coats buttons. I used a lot of those references to evolve the flight suit.

Q: What material did you used for Felicity Jones’ “oilskins” flight suit?

Byrne: It’s ribbed cotton but it went through many many processes. We dyed it and waxed it. We waterproofed it. We sandpapered it. We painted it. We did many things. So, we worked with our textiles department. It started off as a roll of white fabric.

Q: Were you surprised when reading the diaries that they would have such details about their clothes?

Byrne: They didn’t write chapters about their clothes. You have to go through a lot of pages to get details and a lot of understanding. There’s a website called JSTOR, which publishes a lot of academic articles, and if you troll through that you can find people have written incredible essays on women travelers and what they wore.

It was a lot of research—picture research but also reading research as well to understand the intentions and phrases and characters.

Q: How was it creating Oscar winner Eddie Redmayne’s costumes?

Byrne: Those were taken from engravings from the two male balloonists that the flight is based on. I also read about Glaisher. From there, it was just a change in tailoring. His clothes wouldn’t be very expensive. He has to raise money to make the balloon. I wanted his look to be practical.

Q: What was your favorite piece to create for this film?

Byrne: It wasn’t about one particular costume. I really enjoyed playing with color. I liked the cobalt blue dress that Amelia’s sister, Antonia, is wearing during the launch. I took that idea from a dress I saw at the Victoria & Albert Museum in that color. The Victorians wore that color a lot. To be able to use that dress and still be that strong with the color was very important.

Q: You worked again with Jenny Shircore, the hair and makeup artist. How closely do you work together? Is there a lot of interaction?

Byrne: Yes. Huge. There’s collaboration across all departments on this film, and I think (ours) is a great example of that—just how we all handle the snow and ice. Every department has to do it in a different way because of different demands, whether it’s on the skin, or scale of what you have to do, or the budget. When we come to something like a close up of hands on the balloon or the boot going up the bow, we’ve all got to work together. That was incredibly interesting how we all achieved our particular look, but also made them work together.

Q: Was there anything specific that director Tom Harper asked of you? Or did he hand you the ball and let you run with it?

Byrne: He kind of let me run with it but we talked a lot. Because of the nature of this project, it’s how I enjoy working that I use “mood boards” that reference all kinds of ideas, which are very eclectic, and then gradually I hone into it. By not drawing, you’re open to the happy accidents and very much working on the body. We had to create prototypes for the actors to rehearse in the basket, so we knew they’d be able to move. And with, for example, the ropes, we would add leather reinforcement patches where the ropes would be rubbing, so it was very much a collaborative process, and Tom was part of that. He was involved in every stage.

Q: What have you worked on since completing “The Aeronauts?”

Byrne: I wrapped on “Emma,” directed by Autumn de Wilde based on the Jane Austen novel.