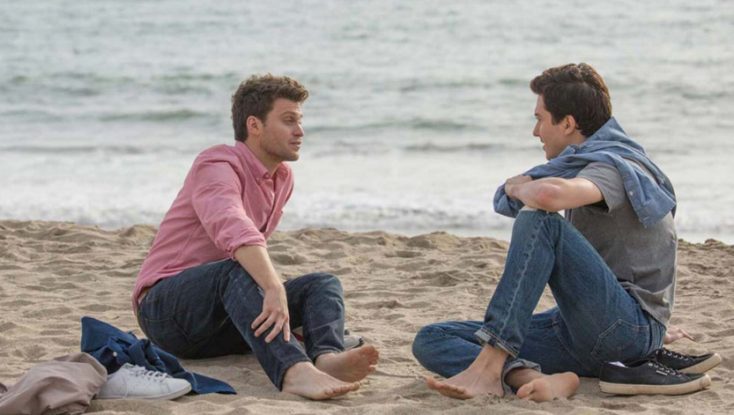 HOLLYWOOD—As the old saying goes, when one door closes, another opens. That was the case for Jon Rudnitsky, a comedian who had landed his dream gig as a cast member on “Saturday Night Live” in the 2015-16 season, but was unceremoniously not invited back the following year.

Down, but not out, the New Jersey native relocated to Los Angeles for a reboot. It didn’t take long for the comedic actor to score an audition on a Nancy Meyers-produced film called “Home Again” that would serve as the directorial debut of the famed filmmaker’s daughter, Hallie Meyers-Shyer, starring Oscar-winner Reese Witherspoon.

“They made it so that I landed in a bed of marshmallows,” recalls the 27-year-old actor, fondly.

Rudnitsky plays George, one of three aspiring filmmakers who move in to the guest house of Witherspoon’s newly separated Alice, as they try to land their first Hollywood movie deal. While one of the other guys wants to romance the not-quite-ready-to-move-on Alice, Rudnitsky’s George helps out with her young children, providing motivation and taxi services. The romantic comedy also stars Candace Bergen, Pico Alexander, Lake Bell, Reid Scott, Nat Wolff and Michael Sheen as Alice’s estranged husband.

Rudnitsky admits upfront at an interview promoting “Home Again” that he is a little nervous because it’s his first press junket, but without missing a beat, he adds, “Thankfully, one of my favorite topics is myself, so this is perfect.”

Q: Did you have to audition for this?

Q: Was it always George you were auditioning for?

Q: He’s the one she really should go for because he’s sensitive and smart.

Rudnitsky: I think so. Maybe (they’ll get together) in the sequel, “Home Again, Again.” So, I auditioned a couple of times and it really worked out. I was so happy. Nancy (“Something’s Gotta Give,” “The Holiday”) and Hallie took a chance with me. I grew up watching Nancy’s movies and to be plopped into that world she creates, although this is really Hallie’s movie. To be working with Hallie on her first movie was really special and to have Nancy there kind of overseeing it, was great. She’s somebody I’ve always looked up to. You can’t ask for much more than that.

Q: Were you nervous working with Reese?

Q: How did you break the ice with her?

Rudnitsky: I was very nervous that first day doing a chemistry read with Reese during the audition process. But she immediately helped me get over those nerves. She’s the coolest, down-to-earth human. It was such a pleasure. She’s a bud. She’s a superstar but also a friend. The fact that she’s been working as long as she has is a testament to her talent because people want to work with her because of the tone that she sets. She doesn’t act like she’s above anybody. She treats everybody as equals and she works hard.

Q: Did you hang out with Nat Wolff and Pico Alexander beforehand?

Rudnitsky: It’s kind of crazy but Nat’s parents have a house in L.A. but they primarily live in New York. And Nat and Pico live in New York. And I had just moved from New York and was looking for a place to stay. So, the three of us actually lived in Nat’s parents’ house while we were shooting so that imitated the movie. It didn’t take long for us to be those same guys.

Q: There’s a funny moment where your character and Nat’s character are marveling at the luxurious sheets in the guest house. Was that improvised?

Rudnitsky: Hallie (Meyers-Shyer) wrote every word of it. I threw stuff out during that but I think what made it into the movie is just what Hallie wrote.

Q: How do you think she did on her first feature? Did she seem like a first-time director?

Rudnitsky: Absolutely not. It certainly doesn’t look like a film by a first-time director. She knew exactly what she wanted.  She had had this movie in her head for a long time. And she came through. There was never a day when I felt I was in the hands of a beginner. This was somebody who had it together.

Q: Did you move to Los Angeles right after “SNL?”

Rudnitsky: Yeah. Right after. I got out of New York and came to L.A. kind of worried because I was unemployed. But the first week I got back I got the call from Nancy and Hallie. They really took care of me. I’m so grateful to them because it was such a good experience. The movie came out really well and I’m happy I got to be George.

Q: You famously recreated Patrick Swayze’s “(I’ve Had) the Time of My Life” dance number on “SNL,” but with an invisible partner. Were Nancy and Hallie familiar with your famous “Dirty Dancing” sketch?

Rudnitsky: Yeah. Nancy actually made me do the “Dirty Dancing” scene the first time I auditioned just for her. I was thinking, “I really hope I get this part because I just danced like a monkey for Nancy.” Of course, I’d do it for Nancy. When Nancy says dance, you dance.

Q: You also did an appearance on Comedy Central where you performed a “Footloose” number, right?

Rudnitsky: Yeah, so I’ve gotten to do all these scenes from these ‘80s classic movies I love.

Q: Do your career aspirations include starring in a TV or movie musical?

Rudnitsky: Yeah, I love dancing around. I’d love to do a musical. I’d love to do Broadway. I don’t know if I have the best voice. I remember when I was a kid, the first time I’d perform was when I’d dance for my family. I was obsessed with Will Smith and the music video from “Men in Black,” so I’d imitate that. There was something funny about it. Then, when I started doing standup and when I was about 25 years old, I came up with this “Dirty Dancing” thing, where I combined comedy and dancing. And it dawned on me, “I should be doing these things together.” Now, I’ve been incorporating it more into my act—a lot of dancing, a lot of music-based stuff. A good chunk of my audition for “SNL,” in addition to “Dirty Dancing,” was music-based comedy. It’s been more of a recent discovery for me even though, if I think about it, it’s actually the origin of how I ended up entertaining. I’m not the best dancer but I’m good enough that I can get away with stuff. I can imitate certain kinds of movement.

Q: You were on “SNL” for only one season. I’m sure you were disappointed when you weren’t invited back for a second one.

Rudnitsky: I wanted to go for a record. (sarcastically) I wanted to see how quickly I could get off the show.

Q: But it turned out to be a blessing in disguise for you, because you’ve had other opportunities.

Rudnitsky: Absolutely, but at the time I didn’t feel that way. It felt kind of terrifying. I was bummed, of course. But now I totally see it as a blessing. I came in alone there. I had a tough time, creatively, with it. A second season wouldn’t have provided more opportunities, maybe even less, given the changeover in cast and some other things. Mikey Day, who’s on it now, is so good. He wrote for me a lot of the time; now, he’s a cast member. So, he wouldn’t have been able to write for me (in a second season) and I’d be flailing a bit, probably. Best case scenario: I got to do the thing I always wanted to do, which was to be on that show. It was No. 1 on my bucket list, in addition to being on “Curb…”  but I didn’t even know that was coming back. To wrap my head around the past two years of my life is difficult. But I got to do a year on that show and experience it and I had a couple of fun moments on it and now I get to do this movie (“Home Again”), which I wouldn’t have been able to do had I not been on the show but wouldn’t have been able to do had I been asked to come back to the show because we would have been in the thick of the season.

Q: Maybe someday you’ll be back there hosting “SNL?”

Rudnitsky: That’s the idea, right?  I like that idea.

Q: What other projects do you have coming up?

Rudnitsky: I just did this movie called “Summertime,” that Pico Alexander was in too that Ed Burns directed. That was just a blast.

Q: Is it a period piece?

Q: You have a TV project in the works, right?

Rudnitsky: Yeah, I’m going to be on the next season of “Curb Your Enthusiasm,” which is my favorite show of all time.

Q: Do you get to work with Larry David?

Rudnitsky: Yeah, my scene is with Larry.

Q: What you can say about your episode or your character?

Rudnitsky: I can’t tell you. They keep that completely under wraps. I’ll say it doesn’t disappoint.

Q: Is it one episode?

Rudnitsky: Yeah, I’m in one episode—Episode 7. I also did this other movie for Netflix called “Set it Up,” with Zoey Deutch, Glen Powell, Lucy Liu and Taye Diggs. I did a couple of days on that; that’ll be great. It was a great experience. I did that while shooting “Summertime.” I also did an episode of “Red Oaks,” the final season of that.