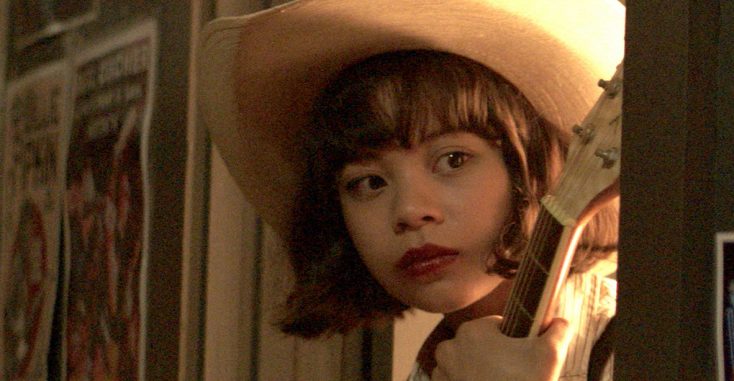 “Yellow Rose,” arriving in theaters in North America Friday Oct. 9, marks the narrative feature debut of rising filmmaker Diane Paragas, a first-generation immigrant. Although “Yellow Rose” is not autobiographical for Paragas, it shares some of her experiences growing up Filipino-American in Lubbock, Texas, where her parents were physicians.

The drama tells the timely story of a Filipina teen from a small Texas town who fights to pursue her dreams as a country music performer while having to decide between staying with her family—her mother is facing deportation—or leaving the only home she has known.

Directed by Paragas, the music-filled drama is written by Paragas, Annie Howell and Celena Cipriaso based on a story by Paragas and Andy Bienen. The film is produced by Paragas, Cecilia R. Mejia, Rey Cuerdo and Orian Williams. Executive producers are Olivia De Jesus and Karen Elizaga.

“Yellow Rose,” distributed through Sony Pictures’ Stage 6 Films, has been favorite at film festivals, garnering numerous awards including a Special Jury Award at the Asian American International Film Festival, the Audience Award at the San Diego Asian Film Festival, among others.

We caught up with the filmmaker via Zoom to talk to her about “Yellow Rose,” its incredible soundtrack (also available Friday, Oct. 9 on Spotify and iTunes), including its catchy “Square Peg” single (already available) and working with a top-rated cast on her first narrative feature film.

Q: Would you consider “Yellow Rose” semi-autobiographical? You hail from a Filipino-American family, grew up in Texas and had a band?

Diane Paragas: The deepest interior of that character is like me. I’m a fighter. I persevere. I love music. I’m a weirdo. I’m a square peg in a round hole. I grew up in Texas. I’m Filipino. All of those things.  But having Rose love country music, specifically, which is not the kind of music I played when I was a teenager, is the part where we differ, and that was very much because I wanted to have a kind of metaphor of this idea of belonging in America. There are few things more American than country music. So, that was one of the things I changed. So, it is autobiographical in that respect, but it’s also different.

Q: You’ve made documentaries and commercials previously but this is your first narrative feature film. Tell me how you got this started because, you’re basically making a musical; music is a big part of the film. Christopher Knight created the score for you. How did you get him involved?

Paragas: Christopher and I went to UT (the University of Texas) together so we’re really old friends. It was very easy going to him to do the score. But the other part of the music was Dale Watson who stars in the film and wrote a lot of the songs in the film together with me, and some other members of the cast. It was always my vision that the members of the cast would write the songs. A big influence on the film was (2007’s John Carney drama) “Once,” which starred two musicians in the lead roles. It’s one of my favorite films ever made—the authenticity, the rawness, the handheldness of it was a big influence.

So, Dale (Watson) was a big inspiration. We shot at his house. We shot at (the bar) Broken Spike. We recorded the songs in his house, in his studio that he points out in the film. That’s actually where we recorded the music. So, the lines of documentary and narrative (film) were very blurred. We were shooting a lot of the stuff that was happening in real time.

Q: You have two accomplished Broadway actresses in this film—Eva Noblezada and Lea Salonga. Can you talk about casting them? Had Eva recorded albums not related to her Broadway work previously?

Paragas: She has. In addition to be a serious actress, she’s a serious musician as well. On her off-days, she would be recording other songs. Dale and Eva bonded over music in a real way. So, the (onscreen) relationship of mentor and student is very real, and we captured that.

What makes her voice so special is the expression behind it. That’s where the acting comes in. She’s one of the most naturalistic actors I’ve ever worked with. The fact that this was her first time on a set—she’d never even been in a short—is mindboggling because her mastery of it, and the natural way she played to the light, was amazing. She knew when we were in close up and all of these things instinctively, which made my job very easy.

Q: How did you get to know Dale Watson?

Paragas: I was directing a commercial and the creative director on that commercial used to be a musician in Austin (Texas). I told him about the film I wanted to make and I had this character (of a veteran musician). He told me he knew a guy, and his name is Dale Watson. So, I went to meet him when I shot my short film, and he is how he appears in my film: the white pompadour, the leather jacket. That’s him. When I talked to him, he was very soulful, very interesting and a very complex person. He had been in a few movies including “Friday Night Lights.” Basically, he’d done little parts in movies over the years, playing a version of himself. I just knew he was the guy. We changed the character to be more like him because we wanted to use his music and his life as part of the film. So, that’s how he became Dale Watson as Dale Watson.

Q: When did you shoot the film?

Paragas: We shot it in 2018 and finished it during the summer of last year. We did our festival run and were acquired by Sony in the fall. We were all set to premiere the film in the spring of this year and then (the global pandemic happened).

Q: The film originally was going to be released this past spring but delayed due to the closure of theaters because of the global health pandemic. How do you feel about “Yellow Rose” coming out now, weeks before the national election?

Paragas: Great! It’s also Filipino-American History Month and this is one of the first Filipino films released by a major studio. The election is weeks away. I think the anti-immigrant sentiment is at an all-time high, which is sad to say, but (this film) gives people an opportunity to look at the world we live in, and this issue in particular through a humanistic lens.

I tried really hard not to make a polemic and beat ideology down on your head, and really just show what a family looks like when they’re split apart. That’s really it. I hope that people can leave their politics at the door and watch this movie with fresh eyes. Once it’s over, you can take your politics back and maybe try it on again.

Q: Did you face racism—directly or indirectly—growing up in Lubbock, Texas?

Paragas: It was pretty direct. When I was in high school, someone had taken shoe polish and rolled it along the side of my car. I just left it on there. It was pretty bad. I was never asked out—things like that—because people didn’t know what to do with me. At the same time, I will caveat that with I had a shaved head at one point when I was in a punk band. I was not exactly trying to fit in. I definitely felt like a square peg in a round hole.

Q: Where were you born?

Paragas: I was born in Minneapolis and my family moved to the Philippines where they intended to live but we fled Martial Law. That’s how we ended up in Lubbock. A colleague of my father’s, who was a doctor—my father’s also a doctor—petitioned for my family so that my father could be a resident in the medical school in Lubbock. It was a little bit strange at first but I love it there. It was my home.

Q: Were your parents strict like Rose’s mom is in “Yellow Rose?”

Paragas: Not at all. Part of the reason Rose’s mom doesn’t want her to go out is because she doesn’t want her to get picked up (by immigration authorities). My parents were the unicorn Asian parents where they supported me artistically. They bought me paints when I expressed interest in painting. They put a piano in my room when I was interested in music. They were very encouraging because my mother, who also a doctor, wrote poetry and is an artistic person as well.

Even in the film, Rose’s mom doesn’t scold her daughter. She actually laughs when you think she’s going to scold her, and hugs her and even sings to her.  So, music is very much a part of Filipino culture, which is something I hope people realize. We all do karaoke. We’re all big singers. Singing is a big part of life. And laughing.

Q: Were you concerned that the title, “Yellow Rose,” might be considered derogatory. Did you have concerns about the title?

Paragas: No. I own it. That’s what Rose mentions that it was what other kids called her at school. I felt, because I am Filipino, I can own it, and she kind of owns it. There is controversy I’ve seen in the Twitterverse about it but when people see the film, they’ll see that it’s not obviously derogatory.

Q: Is the soundtrack coming out the same day as the film’s release?

Paragas: Yes. And the single, “Square Peg,” is out already on Spotify and iTunes.

Q: You had a hand in writing some of the songs. Which ones?

Paragas: I wrote “Quietly into the Night” and I co-wrote with Dale and Thia Megia “Square Peg.”

Paragas: I have a project that was supported by Sundance Lab called “The Three Lives of David Wong,” which is an experimental documentary using puppetry. I’m also writing a script called “Lizards,” which is a pop opera set in Japanese-occupied Manila during World War II. It follows the journey of a young girl who eventually becomes a guerilla. It uses pop music as the through-line, so it’s a proper musical but through an operatic structure. She has a commune with lizards as well so it’s a story about colorism (skin tone discrimination), colonialism, war and big issues during a time that has for too long been overlooked. There are not a lot of movies set during World War II told from a female Asian perspective. So, that’s something I’ve really wanted to do. It’s ambitious.

Q: Will “Yellow Rose” open in the Philippines?

Paragas: Yes, but it will have a different international release date. We’re putting that together right now.