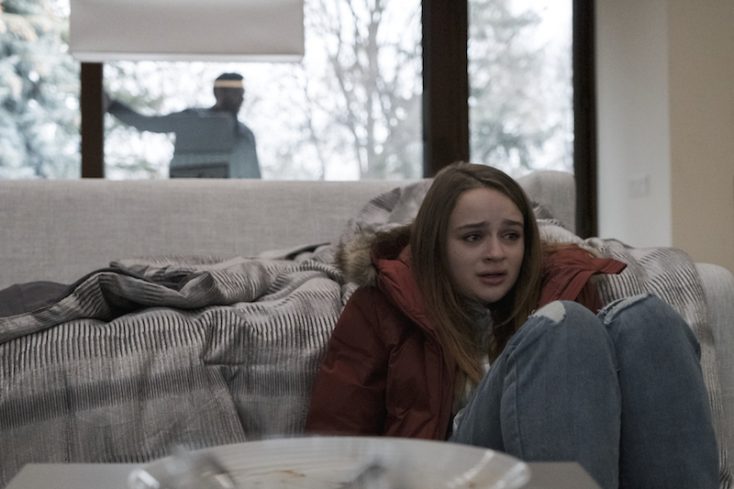 BLACK BOX is one of the new films in the Welcome to the Blumhouse anthology, available on Amazon Prime Video.

HOLLYWOOD—Amazon Prime Video’s “Welcome to the Blumhouse,” a program of eight unsettling, genre movies produced by Jason Blum’s Blumhouse Television and Amazon Studios, premieres this week with “Black Box” and “The Lie,” scheduled for exclusive release on Prime Video Tuesday Oct. 6. Those two compelling thrillers will be followed with “Evil Eye” and “Nocturne” Tuesday Oct. 13.  Each film presents a distinctive vision and unique perspective on common themes centered on family and love as either a redemptive or destructive forces.

In “Black Box,” a young father experiences memory loss following a car accident in which his wife was killed. He undergoes an agonizing experimental treatment that causes him to question who he really is.  Starring Mamoudou Athie (“Black Box,” “Jurassic World: Dominion”) and Phylicia Rashad (“Black Box,” “Tyler Perry’s A Fall From Grace”), the psychological thriller is directed by up-and-coming filmmaker Emmanuel Osei-Kuffour Jr, from a screenplay he wrote with Stephen Herman.

In “The Lie,” a divorced couple reunite to cover up their teenage daughter’s murder of her best friend, and trying to pin the girl’s demise on her foreign-born father. The thriller stars Peter Sarsgaard (“The Batman,” “Mr. Jones”), Mireille Enos (“The Killing”) and Joey King (Ramona and Beezus”), and is directed by “The Killing” TV series creator Veena Sud.

Based on the award-winning, best-selling Audible Original production from writer Madhuri Shekar, “Evil Eye” is directed by Elan and Rajeev Dassani (TV’s “Jinn,” “Blindspot”), and stars Sarita Choudhury (“Mississippi Masala”), Sunita Mani (“GLOW”), Omar Maskati (“Unbelievable”), and Bernard White (“Silicon Valley”). The film centers on a seemingly perfect romance, which turns into a nightmare when a mother becomes convinced her daughter’s new boyfriend has a dark connection to her own past.

“Nocturne” is written and directed by Zu Quirke in her breakout feature debut. The thriller stars Sydney Sweeney (“Euphoria,” “The Handmaid’s Tale”), Madison Iseman (“Jumanji: The Next Level,” “Annabelle Comes Home”), Jacques Colimon (“The Society”) and Ivan Shaw (“Insecure,” “Casual”). Inside the halls of an elite arts academy, a timid music student begins to outshine her more accomplished and outgoing twin sister when she discovers a mysterious notebook belonging to a classmate who recently committed suicide.

Front Row Features caught up with Blumhouse Television President Jeremy Gold who spoke about this groundbreaking anthology series designed to showcase diverse casts as well as female and emerging filmmakers.

Q: The commonality of these films is that they’re not about monsters or demons, per se, but they’re generally suspense and psychological thrillers. Was that intentional?

Gold: The intent was to give the filmmakers the biggest canvas to paint. By design, we tried not to be overly prescriptive about the way they told their stories. Welcome to the Blumhouse is a remarkable series in that all eight movies are from underrepresented filmmakers. All are different kinds of stories: “Black Box,” “The Lie,” “Evil Eye” and “Nocturne” are all stories of family, destruction of the family and betrayal. It’s wonderful that some thematic connections began to form amongst them. We partnered with Amazon to start with this initiative and then the bulk of the material that came out tended to traffic in similar themes. They’re all relatable because there’s nothing more relatable than family in all these different iterations.

Q: There are eight films slated in this series, with four of them premiering this month. What’s happening with the other four films?

Gold: We want to focus on these first four that are launching. The others are all in various stages of completion. Most are completely finished. It’s another slate of different filmmakers and casts coming.

Q: Some contemporary social issues come up in these first four films. With “Nocturne,” for example, the subject of suicide is delved into. Cases of suicides among young adults already had been rising even before the coronavirus pandemic but studies show they are on the rise, which makes this film very relevant to the times. And with “Evil Eye,” young people with roots in India deal with identity and cultural issues while living in the South.

Gold: For sure. Each story has its own authentic origins. We’re so fortunate in that we found this material and identified these filmmakers to work with. The goals of these are to provide an opportunity for these filmmakers to tell an organic and authentic story. With “Black Box” and “Evil Eye,” in particular, we wanted to show cultural sensitivity. That was one of the challenges for us to match the right directors to the material.

Q: “The Lie” could be regarded as a conventional thriller. But there’s the undercurrent of underlying racism as the white couple tries to frame the immigrant father of the missing girl for her disappearance.

Gold: It’s just another marker that we all have to be talking about. Just because it wasn’t in the headlines (when these scripts were written or the films in production), it doesn’t mean it wasn’t on the minds of all those individuals that were on the receiving end of some kind of systemic prejudice or racism before.

Q: And the next four films? When will they come out?

Q: What are your goals for Blumhouse Television for the next five years?

Gold: We’re enormously proud of the growth of Blumhouse Television. I’d love to see us expanding growing the footprint of that. There’s never been a better time to be storytellers in the television landscape. Both across television series, including our documentaries, but also in the streaming movie space, which is something, obviously, we’re very engaged in. We’ve been very fortunate to grow at the rate we’re growing. My personal hope, honestly, is to continue that, and stay right where I am.