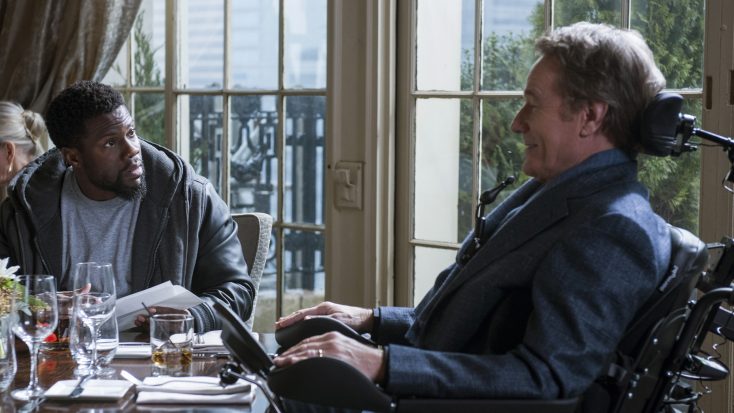 HOLLYWOOD—Bryan Cranston and Kevin Hart play characters that bridge the gap between rich and poor, white and black and the physically disabled and able-bodied to forge a friendship in the heartwarming dramedy “The Upside.”

Based on the 2011 French film “Les Intouchables,” inspired by a true story, “The Upside” is an uplifting film about how people from diverse backgrounds can connect if they put aside their biases and make an effort to understand and learn from one another. The update is directed by Neil Burger (“The Illusionist,” “Limitless”) based on a screenplay Jon Hartmare.

Cranston, best known for playing a cancer-ridden chemistry teacher who devolves into a drug kingpin in the award-winning TV series “Breaking Bad,” plays billionaire businessman Phillip Lacasse, who is left quadriplegic and embittered following a paragliding accident. Comedian Hart (“Ride Along” films, “Night School”) plays Dell Scott, a dejected ex-con, who applies for the job of an in-home health aide and miraculously gets it when his chutzpah impresses the Park Avenue billionaire.

Dell has no experience as a caregiver and his learning curve makes for some amusing scenes such as when he has to move his new boss from a bed into an electric wheelchair and nearly drops him on the floor. Meanwhile, Phil has lost his passion for life and, other than his ever-present overprotective secretary Yvonne (played by Academy Award winner Nicole Kidman), he has no interest in interacting with anyone. Naturally, the fast-talking Dell manages to help restore some humanity into his emotionally scarred patient. At the same time, Phil helps Dell gain some perspective on where he went wrong with his life and how to re-connect with his ex-girlfriend and young son.

Hart, who was slated to host this year’s Oscars until an old social media post landed him in hot water with some in the LGBTQ community, was joined by Cranston last fall (before all the hullabaloo) about their pairing in “The Upside.”

Q: Both of you met with quadriplegia victims. Bryan, what was the main thing you were hoping to get from speaking with those who had these debilitating accidents?  Kevin, what did you learn in terms of working as a caregiver?

Cranston: In developing the character, I wanted first and foremost to find out what changed in them as a human being. What their hopes and ambitions were before, what are they now, being realistic about that. Where is there level of happiness? How do they define themselves? What steps they had to go through, level of depression. I mean it’s a very arduous and daunting task for them in a day to day basis.

I spent a lot of time with three different quadriplegics, all very different people. Good support group. That’s primarily what makes them pull through, is that the people who help them on a day to day basis is absolutely necessary. Once again, the caretaker is the most under-appreciated person involved in this scenario. That’s what I was drawing in.

You can’t help but feel privileged if you have use of your limbs. I hope that in a subliminal way, it shouldn’t be on the surface of it, but I think our audience hopefully will have a great experience. They’ll laugh, they’ll shed a few tears watching this movie, they’ll feel good about it, and perhaps they’ll also realize how blessed that most of them are. That’s a nice service. I think it’s something that we can use in our society right now. Some good news. Something that has some upside, if you’ll pardon the pun.

It’s so amazing to see a person give their time, give their energy, give their day to day, to make sure that a person that’s going through what a lot of these quadriplegics are going through have a smile on their face. From the proper way to take care and maneuver and move, the respect level that I left with was so high. This woman was so strong. She was smaller than me, and as you guys can see, I’m a very big man. I’m a very broad individual.

Because me, Bryan and Neil (Burger, the director), we wanted to make sure that we did it correctly. We didn’t want to put a movie spin on it. How should I transport Bryan from the chair to the bed? How do I take Bryan from the bed? Put him in the chair? How do I feed Bryan? What’s the correct way?

When this woman showed me how to take Bryan out of the chair, it was a one-swoop motion of head on the shoulder, grab the butt, pull the butt up, lock him, secure him, move. I struggled with this man so much in rehearsals. I remember there was one morning where I was like, “Bryan, are you helping or not?” He said, “No, Kevin. I can’t. I can’t help. This is what we have to do.”

She can do this so well, so effortlessly. There’s so much technique involved. It’s such a craft. You have no choice but to respect and appreciate the craft. That’s what I left with from the caretaker. It was a high level of just appreciation of what they do and what they bring to these individuals’ lives on the day to day. It’s amazing to see.

Q: Kevin, you presented comedy that’s inherent in life, but you also brought a sobering aspect to it and really showed your dramatic chops in this. How did you manage to temper your own exuberance to capture Dell and bring him to life?

Hart: That was the reason for taking this film on. I wanted to switch it up. I wanted to give my fan base a different look at the world of Kevin Hart, and to see what I consider my talents to be. To do that, I said if I have the opportunity to partner up with some amazing actors and actresses, they’re going to help bring that out of me. I know what I’m capable of, but when you stand with the A+ of the A+, being Bryan and Nicole, you have no choice but to come prepared and come with the expectations of following their lead.

Neil did a good job of talking to me before and seeing where I was. Neil was more worried than anybody in the beginning. “You’re not going to be like the funny Kevin?” “No, Neil, trust me.” I think in all the conversations we had, they ended with the words, “Neil, trust me. You’re going to be shocked at how I come.” He said, “Okay. I just want to make sure that we understand how this guy has to be. We’ve got to believe him.” We’ve got to feel this guy. We have to understand the world that he’s coming from and why him stepping into this place is so different from him, yet why he finds an interest in Bryan’s character and why he takes a liking to him, and why the tug of war is necessary for them to get to the end point.

So, all of these conversations were conversations that helped me in the beginning, but they gave me more confidence going in to really pull this thing through and have the shock factor. I wanted people to walk away with, “I didn’t know Kevin had that in him, and he did.” But more importantly I’m looking at it from, I’m so glad I had a great director. I’m so glad I had Bryan and Nicole there, because they helped me on a day to day reach the levels that I got to.

It’s not something that I would take as a Kevin moment by myself. It’s a team effort. Without a good team, you’re never going to win. And, in this case, that they set me up with the best possible team that I could ask for in this film.

Q: How do you describe your characters?

Cranston: We’re two characters that are stuck and are able to get together. And, because of that friendship, they unlock the potential for a future. So, the love aspect of it is something that comes when you feel you do have a future. You put a sign out, a subliminal sign, like, “Don’t talk to me.” Or, if you feel like, “There’s a different feeling in me. I have an optimistic outlook,” well then you’re now open to the possibility of love coming in to your life.

Hart: The biggest thing that’s unlocked from Dell’s point of view is that Phil has the one thing that I feel should make him happy, which is money. The biggest understanding for Dell in this movie is that money does not equal bliss and happiness. When I realize what I do have, by the understanding that’s clearly given to me from him, when I realize what I’m able to do and what I do have, the thought-process slowly changes for Dell. It becomes about family, my son. It’s creating a better relationship with my son. It’s taking advantage of an opportunity to just set myself up to live correctly (and) not to continue to make excuses, because the excuses aren’t going to get me to where I feel I need to be.

Q: Do you experience these similar takeaways yourselves?

Hart: Of course. With money, I definitely have. I was a young guy that came from nothing, and coming from nothing, I thought the only way to get something was to get money. And, as a guy that’s had it, lost it, gained it and told myself I would never lose it again, because this is what you need to win and be in the best position of life, you have it and then you realize that the stuff that you have with it doesn’t hold value to the things that you hold dearest to your heart— my wife, my kids, the family.

The moments that we have together are the things that are closest to me, the things that I really hold on to. The materialistic things that you purchase become second, third and fourth thoughts as to what’s most valuable.

The time spent with my family, that quality time, is what’s most valuable. You realize that when things happen in your life and you see stuff fall apart. You realize what doesn’t change is your surroundings, your circle.

Cranston: There’s nothing more important than health, really. Once you become a father, that’s the only wish you have. Health and safety for the family. If you have that, then you’re very lucky.

Reporter: Kevin, what do you miss most about your hometown of Philadelphia?

Hart: Cheesesteaks. Don’t tell nobody I said that, though. They think that I’m on this healthy kick.