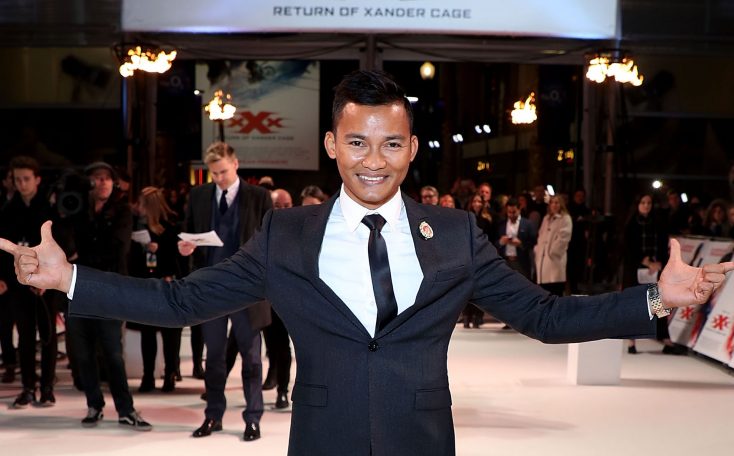 As Diesel puts it, “Tony’s my lucky charm.”

Jaa, known to martial arts film aficionados as the star of the “Ong-Bak” trilogy, plays Talon in the D.J. Caruso-directed action movie. A member of a dangerous spy ring, it’s his team’s job, under the leadership of Xiang (Donnie Yen), to retrieve a satellite killing super-weapon called Pandora’s Box before the CIA’s equally lethal covert team, led by Diesel’s character, finds it. Jaa, who sports a blond Mohawk in the film, gets ample screen time to show off his well-honed martial arts skills, alongside Yen, a Hong Kong action icon, as well as U.K.-born UFC middleweight champion Michael Bisping. The non-stop action film, with its international cast and incredible extreme sports action sequences, earned $70.5 million in its opening weekend, more than 70 percent of it overseas.

Jaa was born in a frontier province 10 kilometers from the Cambodian border, when the Khmer Rouge ran Cambodia. They would come in with impunity into his village every day. His parents were elephant herders so they couldn’t imagine their son would ever leave the village, let alone become an international film star. Thanks to a scholarship, Jaa was able to leave and become an expert in Muay Thai, a style of martial arts that utilizes primarily the elbows and knees to disable an opponent. Jaa also is noted for his incredible ability to jump, which landed him notice in his first Hollywood role.

Q: Vin Diesel said he sees this film as a metaphor about cooperation to achieve a positive goal.

Q: His character and his group set out to find this piece of technology that can be dangerous. How do you feel about technology? Do you worry about how it can be used negatively?

Jaa: But you cannot control it. It lowers the battery. So technology can be used for good or bad. We had to deliver a message—to protect the young generation from this. We can entertain and inform.

Q: There are a lot of female heroes in this. How did they do?

Jaa: They were character-driven. When audience sees it, they see how talented they are. Character first, and then action, second.

Q: Did you dye your hair blond specifically for the role? Is that something you came up with or was it in the script?

Jaa: Yeah, I looked like a rooster. It was planned in advance.

Q: What did your wife think of your new look?

Jaa: She liked it. It was like having a new husband. (He laughs.)

Jaa: I was able to push another project back so I could do this.

Q: You shot this in Canada and the Dominican Republic?

Jaa: I was only in Toronto. The scenes in the outdoor cantina were on sets.

Q: How do you keep the energy up to do multiple takes on the action scenes?

Jaa: I learned a lot from Vin Diesel. Every time we had an exchange, we would exchange about energy. Vin, for example, has a technique of putting on the music. (He starts doing beat box sounds.) The melody and tempo is cool. It makes our energy go up. There’s dancing and it gets people up. Everybody came in every morning with a lot of energy.

Q: Is it true you had a tattoo of a tiger on your arm?

Jaa: On the top of my left arm. It was a temporary tattoo.

Q: Why the tiger?

Jaa: My character is Talon. So it’s “T” for Talon or Tiger. And “T” for Thailand. That’s a very important signature.

Q: What was it like to work with your co-stars who are from all over the world?

Jaa: It was a good experience for me to be with all these stars from all over the world. I took Donnie Yen (from Hong Kong) and Deepika Padukone (from India) to a Thai restaurant. I think we all were able to learn about each other’s culture.

Q: How many times did you and Donnie Yen go out to eat together?

Jaa: A lot of times. We talked about how we made martial arts movies. We have different styles: (I do) Muay Thai and (he does) kung fu and Wing Tsun. His style is really fast, with probably 20 punches—pop, pop, pop—in quick succession. And the Thai style is elbows and knees; it’s really hard. We shared ideas. We had Bobby (Bob Brown), the stunt coordinator and his stunt team, and we choreographed them together.

Jaa: I liked the party scene because I love songs and I love hip hop. That was the most fun.

Q: That had to be choreographed like a dance routine, because your character, Talon, is making his way through the crowd.

Q: Do you still live in Thailand?

Q: You’re a superstar there. How do you deal with fans and fame? Do you get recognized on the street?

Jaa: Yeah. There are fans everywhere, but they’re respectful. They don’t mob me. They might come up and politely ask for an autograph or say, “Hey, Tony, welcome!” They treat me like family. But they always treat me with respect. It’s never violent. They don’t try to come up to me and hit me.

Q: Being in international hits like “Furious 7” and working with Vin on this, has that forced you to reconsider how you deal with fame outside of Thailand?

Jaa: Yeah. It’s OK, because they’re fans. But sometimes people are crazy so you have to be careful. But a fan is a fan, and it’s OK to take a selfie or get an autograph.

Q: Do you do a lot of social media?

Q: So you communicate directly with your fans?

Jaa: Yep. I answer them myself. There’s no team.

Q: Why do you feel the need to be personal like that?

Jaa: They take the time to follow me so I believe they deserve the recognition. I think being connected to your fans like this is important. It wasn’t like that before. Before, we didn’t have the technology, social media, but now the world is close together. It’s small. We can share our culture and customs. People want to know about each other’s culture and we can make new friends.

Q: While you’re here in the U.S. promoting your film, are you taking meetings with filmmakers and producers?

Q: Jackie Chan has managed to mix comedy with martial arts, of course.

Q: How old were you when you saw it?

Q: When did you leave your village? Where did you first go?

Jaa: When I started high school and attended university on a scholarship. And then I started stunt work. The first Hollywood movie I did was “Mortal Kombat.” I was a stunt double for Robin Shou in that. Director (Paul W.S. Anderson) said, “Who can do the high kick?” And I said, “That’s me,” and I did it. Everybody was like, “Whaaa?” So then I became Robin’s stunt double. (Anderson) then told everyone, “Tony Jaa, Hollywood.” I’ll never forget it. I wanted to go to Hollywood.

Q: So you would meditate on set?

Jaa: Yes. I taught producer Jeff Kirschenbaum and D.J. Caruso, the director, “3-2-1, 3-2-1, focus,” how to learn basically to focus. How to control and not think about anything. It’s good for you.

Jaa: An action movie that he starts in five weeks that’s geared toward the Asian market. It’s going to be shot in Thailand but it’s for the (entire) Asian market.